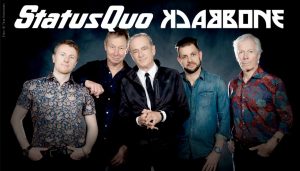 Status Quo have been active since 1962. Originally named "The Scorpions" they have had a number of name changes since; "The Spectres" in 1962 and "Traffic Jam" in 1967. When Steve Winwood formed "Traffic" in 1969, they decided to change the name again, this time to "The Status Quo", which was later shortened to the one we are all now familiar with "Status Quo"

The band have had over 60 chart hits in the UK, 22 of which reached the top 10 in the UK Singles Chart. In July 1985 the band opened the Live Aid concert at Wembley Stadium with "Rockin all Over the World"!! 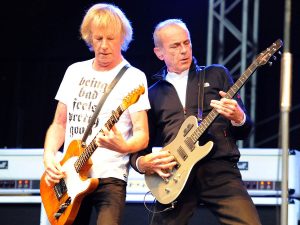 Backbone is the first album to be released by the band since the death of rhythm guitarist Rick Parfitt, who had been credited on every prior Status Quo album. It is their 33rd studio album, or as the band say "our 33rd 33rpm". It was released worldwide on 6 September 2019 and debuted at no. 6 on the UK albums chart, making it the band's 25th UK top ten and their highest charting album of entirely original material since 1982's eponymous 1+9+8+2.

Shangrla Radio is featuring 4 tracks from the album,

Backbone
Liberty Lane
Running Out Of Time
Waiting For A Woman