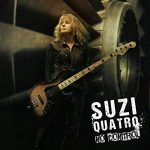 Hot on the heels of QSP (Quatro, Scott and Powell), one of Shangrla Radio’s most popular artists, Suzi Quatro, is releasing a brand new album titled “No Control” – Not a surprising title really coming from this Rock and Roll Dynamo. Suzi began her career in the 1960’s playing with her 3 sisters; Patti, Nancy and Arlene, first in “The Pleasure Seekers” and then “Cradle” before being whisked off for a highly successful solo career by Mickey Most. Suzi became the first female bass guitarist to reach rock stardom. Some may remember Suzi as the leather clad “Leather Tuscadero” in the TV Comedy “Happy Days“. Suzi is the aunt of Sherilyn Fenn of “Twin Peaks” fame. Suzi’s career spans more than 50 years and she is still going strong!! Suzi herself says:

“I WILL RETIRE WHEN I GO ONSTAGE , SHAKE MY ASS, AND THERE IS SILENCE”